It's known that in the summer break most of the Kuwaiti travele abrod ...
But why???
can't we make Kuwait a tourists attraction destination...???
I think we can... and we already taking the first steps towards this target...I know that some of you are think now " what the hek his talking about???!!!" and I dont blame you ;-)  let me explain.......

Have you ever heared about BIOROCK REEF??
as you know corals takes a lot of years to grow and what people are doing to the is not helping too... here in Kuwait most of our reefs suffers from coral bleaching.
the pictures below are Not in Kuwait ..it just a good example for coral bleaching which a serious sign that the coral are dieing and when the corals dies it will have a hugh negative impact on marin life.

So the Diving team in the Kuwait Enviornment Protection Society (KEPS) started the BioRock project in one of Kuwait Islands and after all the hard work the good result start to show up..
BioRock is basicly bulding a steel models and conect it to one side of the power supply to act like a Cathode,and connect the other side to an Anode to creat an electric filed of 6~9 volts which is safe to divers and marine life, this will result of bulding up of calcium carbonate on the steel model, the divers will collect broken coral and fix it on the steel model so that the calcium will provid a good fixing point for the broken coral and with the electric stimulation the corals will grow 5 times faster. Unfortunately most people in Kuwait are not enviornmental friendly or not green enough . As you can see in the picture below , most of Kuwait islands have mooring buoy to be used instead of the boat's anchor to not destroyed any coral , but this boat owner decided to drop his anchor near the mooring buoy??!!

Also uncontrolled fishing ,  Specially spear fishing , has resulted in extinction of some fishes that feed on sea urchin and now sea urchin are increasing in numbers so fast and the problem in that , sea urchins feeds on corals.
The diving team in KEPS are working so hard to revive the coral reef in Kuwait island and make Kuwait a Diving Heaven Destination.... 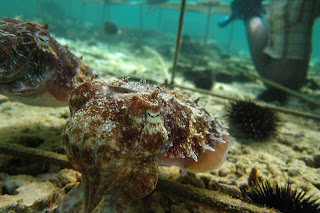 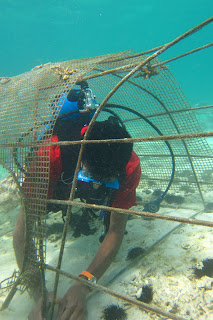 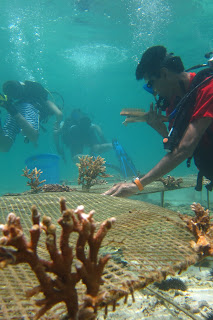 Capt. Jasim Al Failakawi with his team fixing broken corals on one of the models 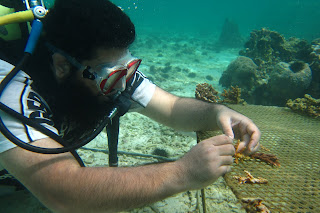 Me :)  scuring some of broken corals on one of the models 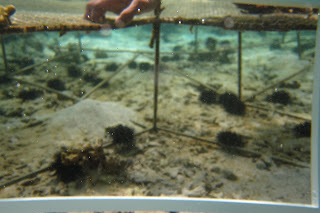 The infestation of the sea urchins 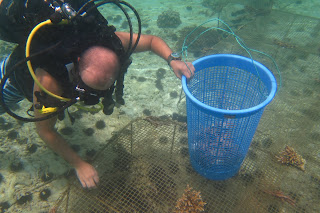 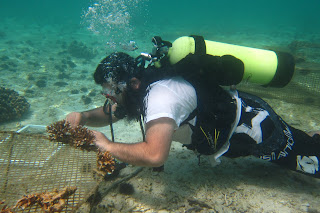 At the end I really recommend that you visit the Kuwait Environment Protection Society they have raelly good summer activities for kids .There are in Shouakh next to KNPC bulding or call : 24848256 - 24812019
Posted by Unknown at 16:12